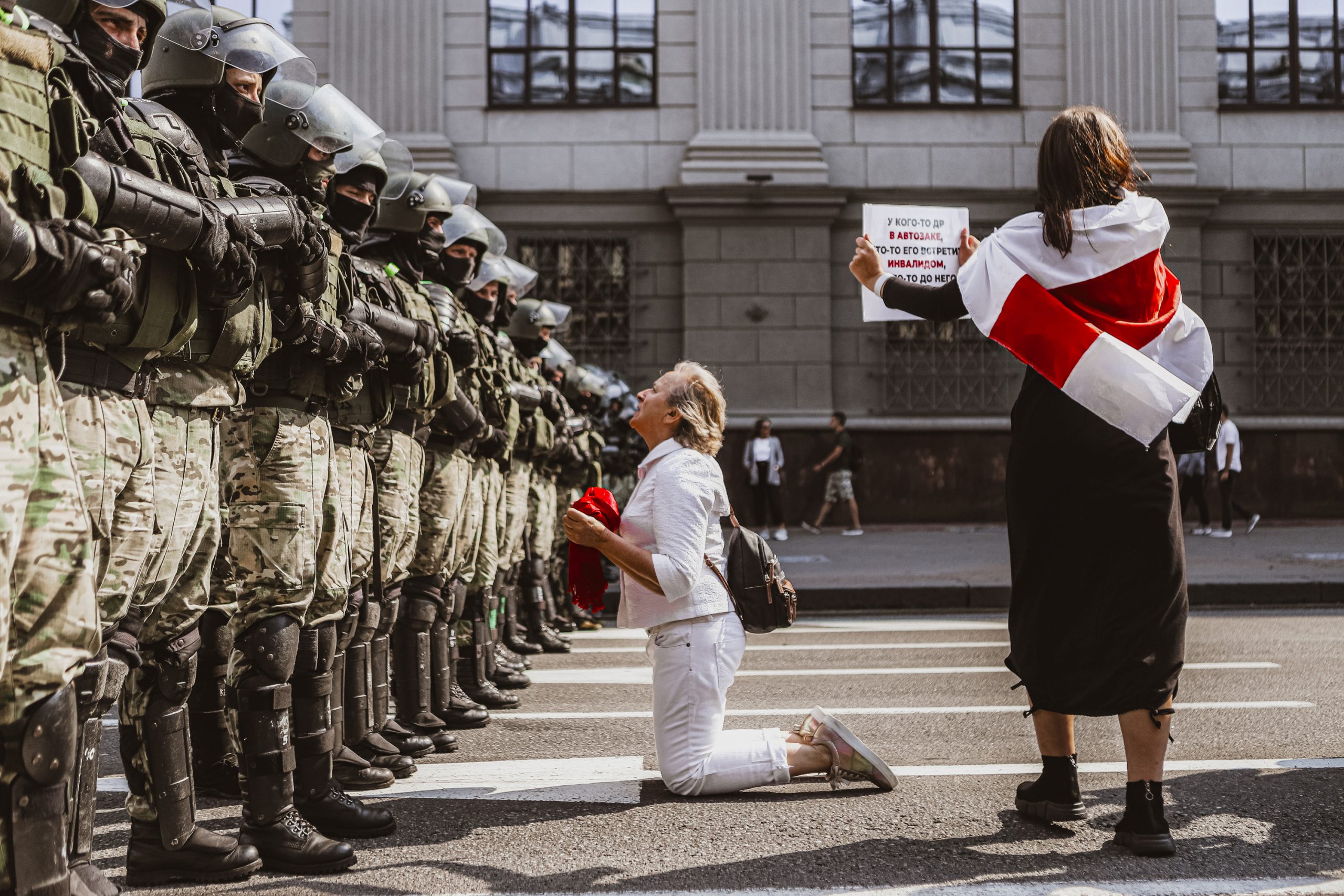 “A woman is kneeling in front of the security forces. Traditional peaceful Sunday march of those who disagree with the results of the Presidential elections.
From ‘Belarus Protests’. After the presidential elections in Belarus on 9 August 2020, a wave of mass and peaceful protests against the re-election of president Alexander Lukashenko began in the country. Demonstrators were met with violence, repression, detentions, and prison terms. In the aftermath of the protests, authorities jailed dozens of journalists, political opposition figures, presidential candidates, civic activists, and human rights defenders.”
Many of them subsequently reported that they were subjected to humiliation and violence in detention. 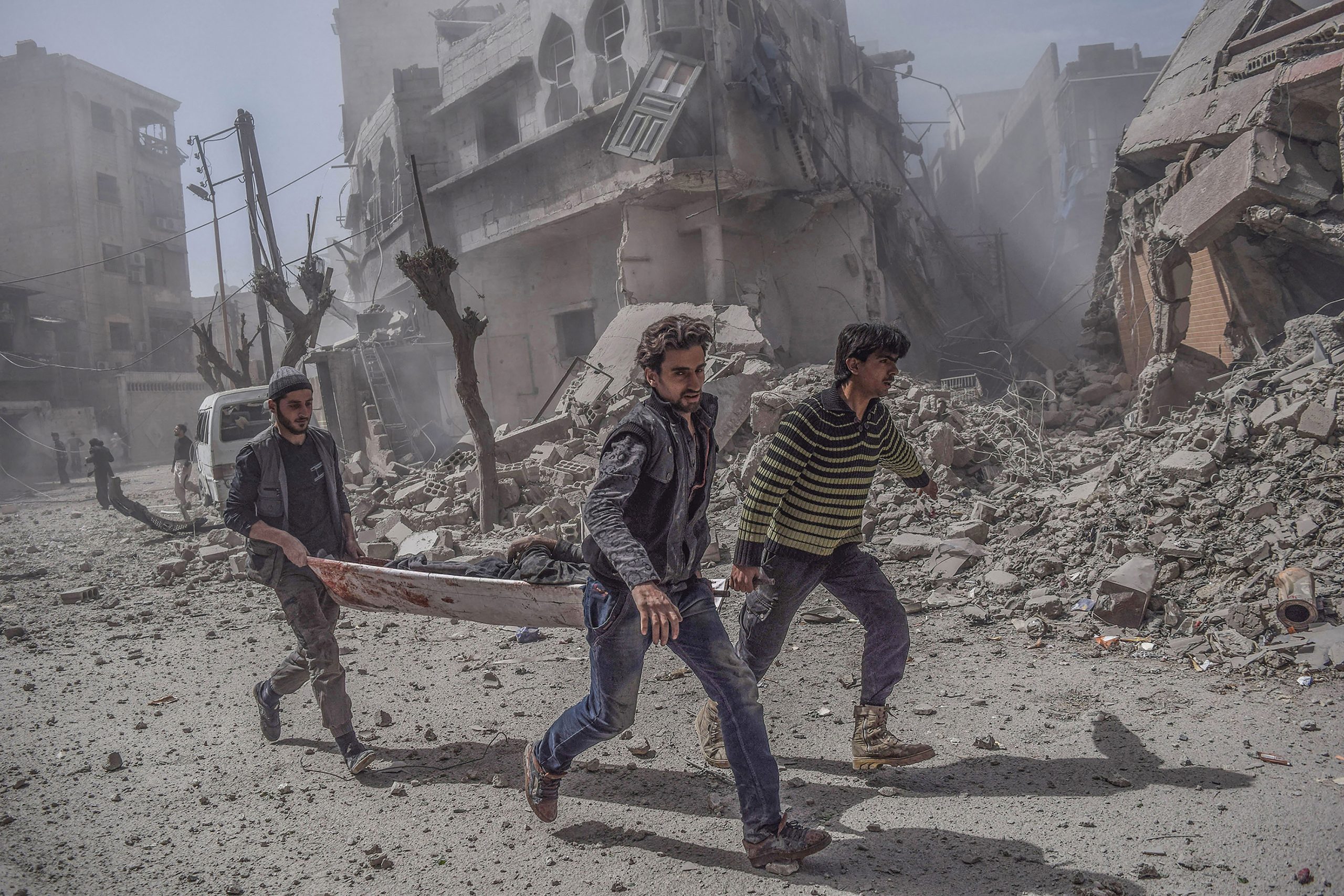 ” In war, life has a different meaning, everything about normal life will disappear. The daily routine is definitely unnatural, even if it seems normal to the people who live there. Every day bombs fall, people die and buildings are destroyed. The reality of war cannot be denied, but there are people who try desperately to resist the bitterness of this terrible war with their determination, hope and desire to live. This project illustrates the struggle of civilians to overcome the war in the besieged area in Eastern Ghouta, Syria, which has been besieged by Syrian government forces for more than 7 years. The siege ended when the Syrian regime, with the support of the Russian forces, forced the people to leave the area after months of heavy bombing operations that killed thousands and led to mass destruction in the region.”

Syria – Eastern Ghouta
“Civilian men trying to rescue an old man while a raid fell at the same moments behind them, as shown by the picture of the destroyed leaning buildings at the same moment 150 people were killed. “ 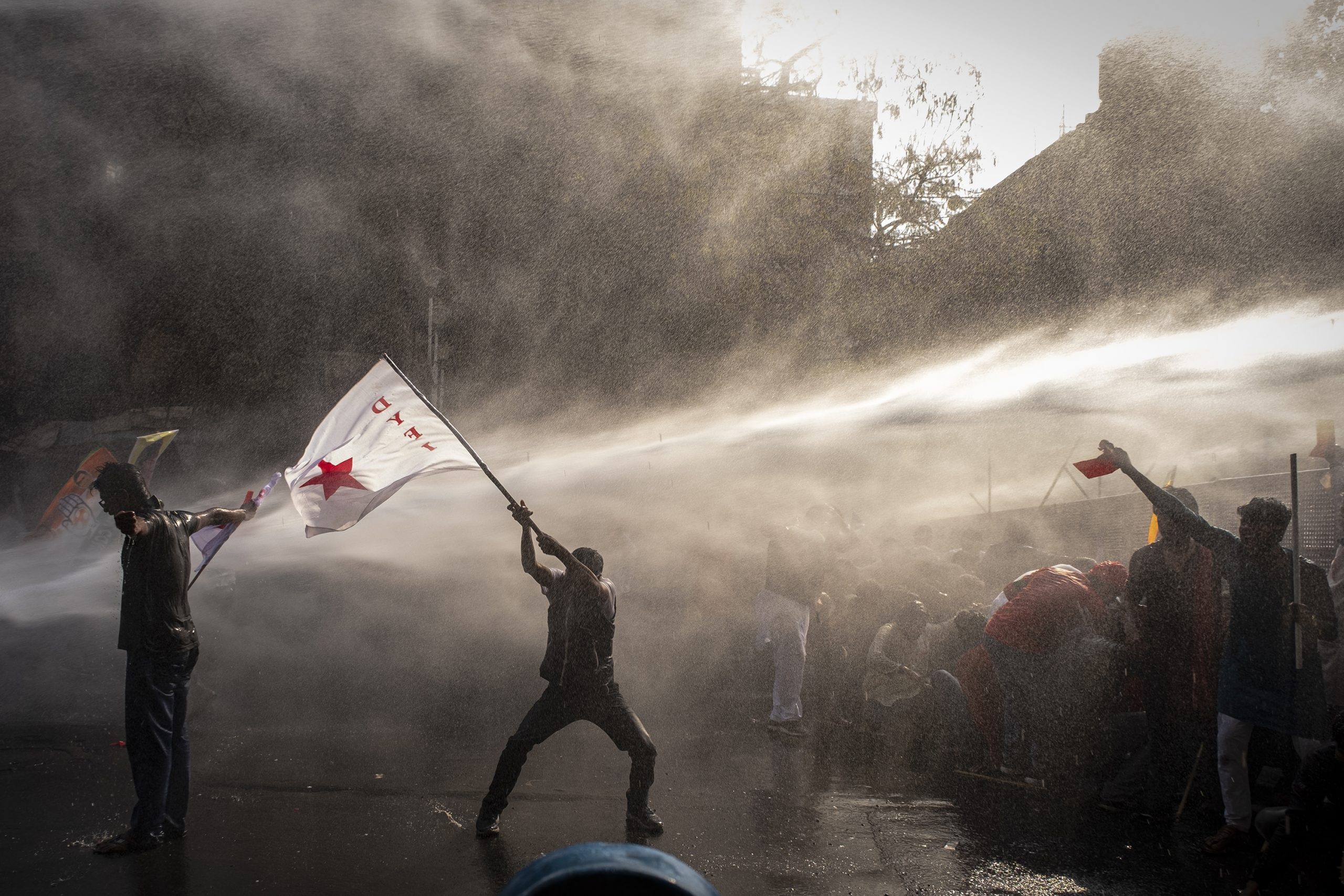 Where The Mind is Without Fear by Dipayan Bose (India)

“A student is holding the left party flag high during a clash between police and youth wings of left parties. Students and youth wings of Left supporting organisations
participated in a protest rally, raised their voices demanding education for all, employment for the youths, reject the anti policies of the ruling Government. The police resorted to lathi-charge, firing tear gas and water cannons to disperse the left-wing activists during the demonstration. The protest went violent, and many were injured.” 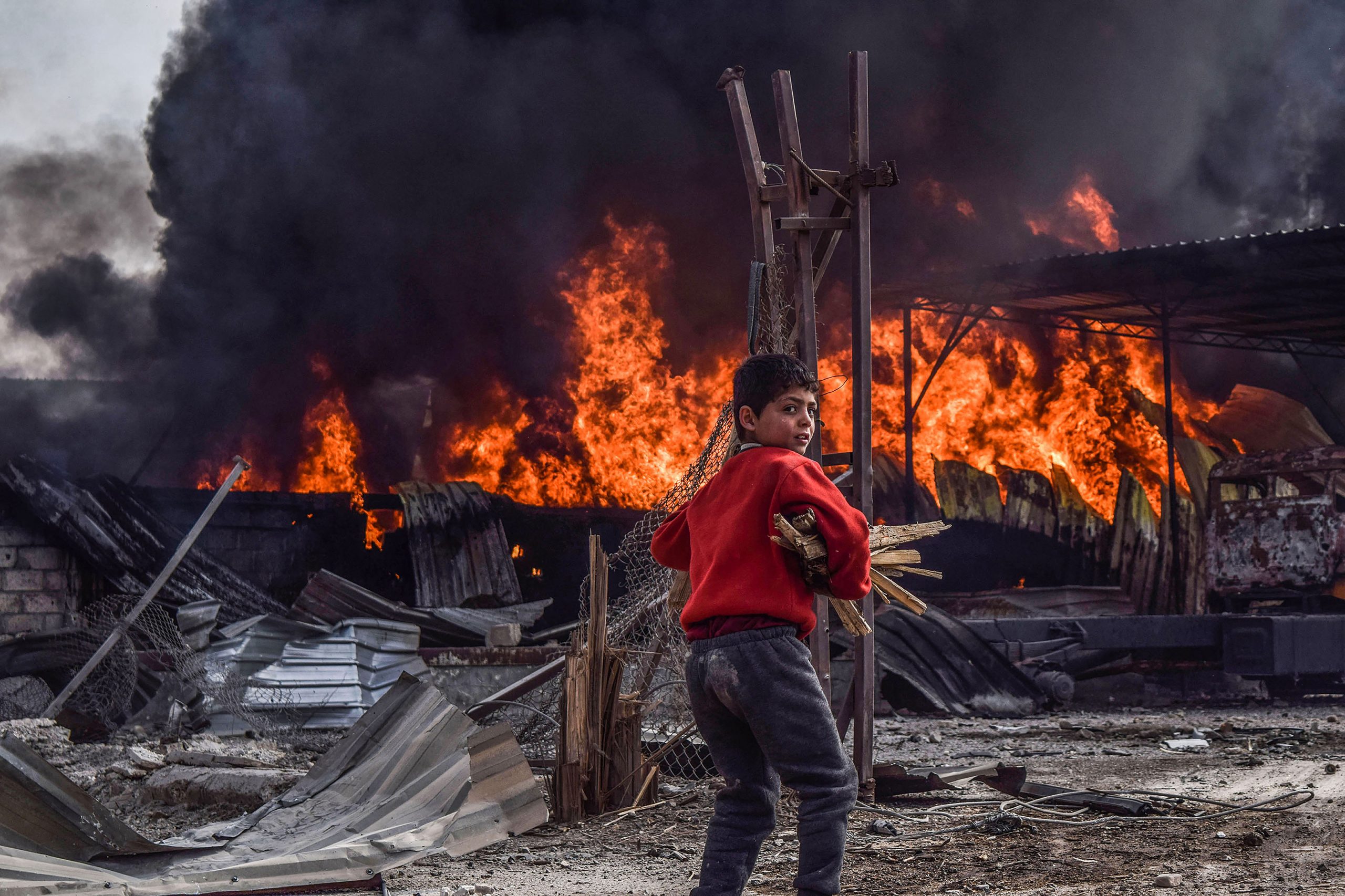 Syria – Eastern Ghouta
February 2th, 2018
“A child looks very terrified after an air strike from behind him and looks
with horror to be the place of the attack in the building where his family
lives while collecting firewood in the winter.” 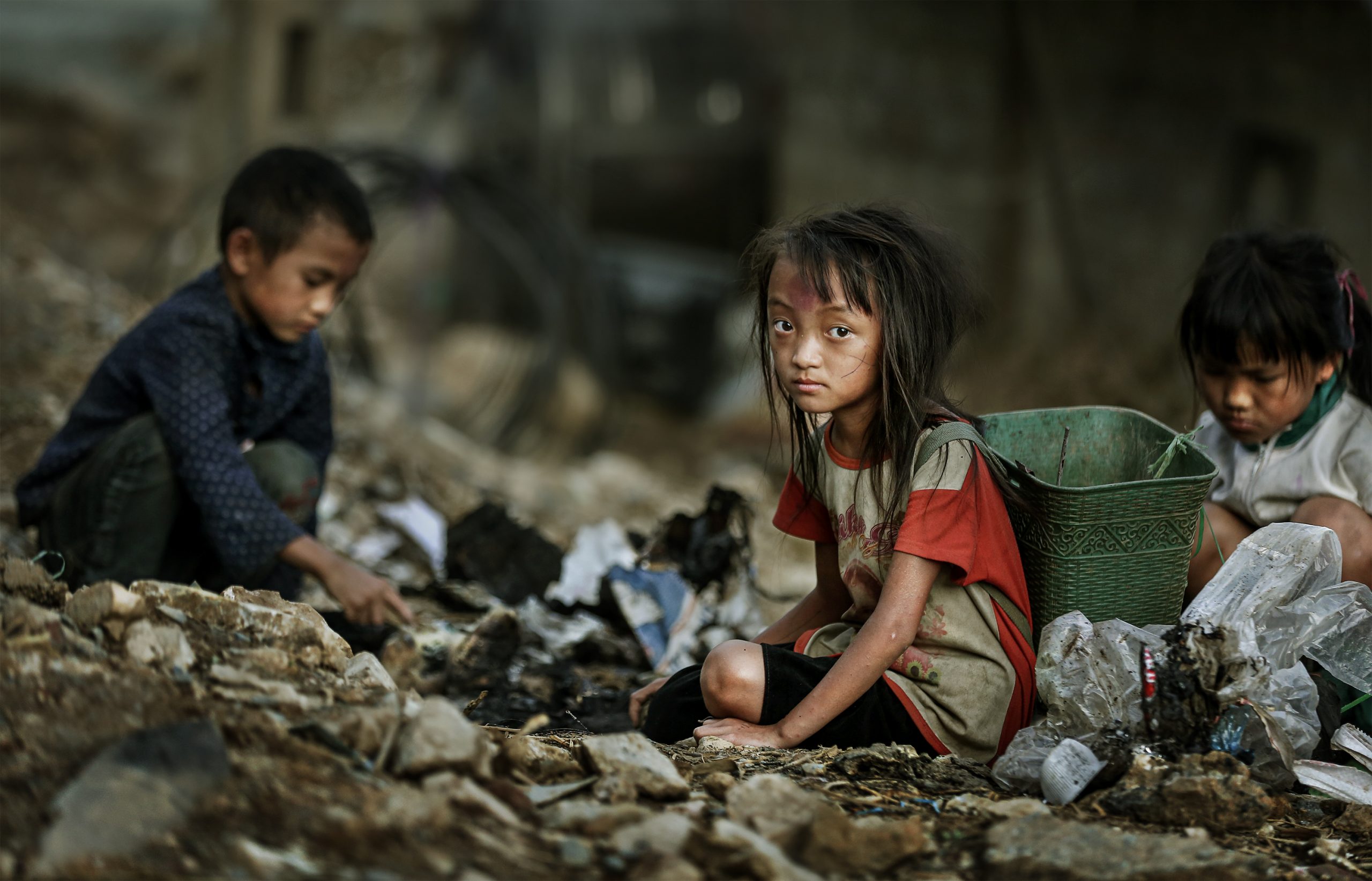 May 21st, 2020. Sapa, Lao Cai, Viet Nam
“Every day the children have to find things from garbage trees to earn money to help the family. Through this photo, I want to send a message to everyone about taking care of children’s lives, letting them have fun, learn, and immerse themselves in their childhood. I very much hope this photo will spread the message globally.” 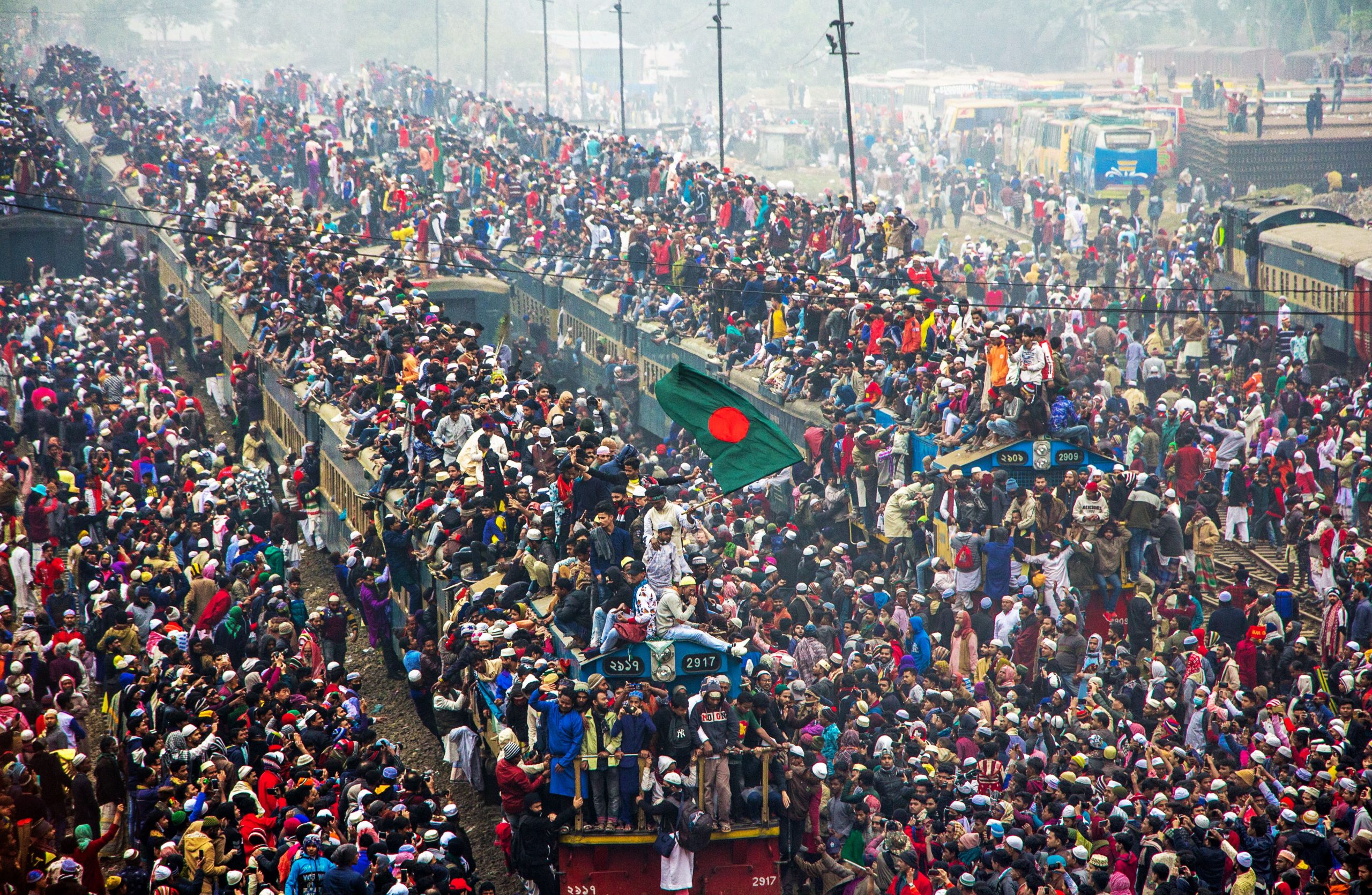 Massive Gathering on a Local Train by Rayhan Ahmed (Bangladesh)

“People availing very risky train journey and taking every space of it as seat. They are returing home after the 2nd largest Muslim Congregation in Dhaka, Bangladesh. Bangladeshi Muslim devotees return home on overcrowded trains after attending the final day of a three-day Islamic congregation on the banks of the River Turag in Tongi, near Dhaka, Bangladesh. The 1st phase of Biswa Ijtema ends today with Akheri Munajat, or the Final Prayer, and Muslim devotees from across the world participated in the second largest world congregation of Muslims.”